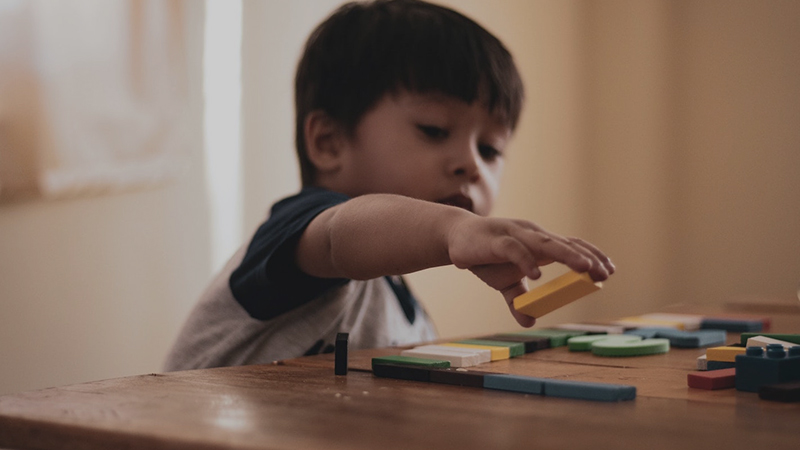 In the initial years of a child’s life, the intensity of exploration is quite high due to which they do not like being confined towards any particular physical space or a fenced surrounding. They like  doing things by themselves. In short, they love putting their immense amount of energy to use.

Expanding their language vocabulary, the children at the age of two or three are able to name the things around them. They are even able to express their thoughts and feelings. This period is called a critical phase for language development as hundreds of words are added to the child’s vocabulary in a very short period of time.

Reaching the third year, their sense of self expands to the things around them and they actively start interacting and engaging with them. They even start attaching themselves to things around, personalising and de-personalising things: this is ‘mine’, this is not ‘mine/his/her/their’. Children are able to sort things as per their typology and learn to control their behavior as well. As a skill, they also often imitate children and adults around them. As the development is quite rapid, they enjoy consistent activity and dislike the time when there is no activity or when they are asked to nap or go to bed at night.

At this age, the children have good physical control over their bodies due to their toilet training. They become independent enough to get dressed and even feed themselves with little to no help from the caregivers. By this age, they all have their baby teeth. They can sit and read books either alone or with an adult. They’re able to ride a tricycle and are able to use a variety of art and stationery products also. They enjoy playing, be it with other children or by their own selves and are very curious about the world around them and are even able to do puzzles with eight to 24 pieces.

The child is able to name and sort objects based on categories. They have begun to understand the idea that something causes a certain kind of effect, and they show interest in science and nature. Because they are gradually learning abstraction, they enjoy fantasizing, pretending and making up stories. They have a good memory and attention span of around 20 minutes. These kids love familiarity, so they like to hear the same story or watch the same movie over and over again and can recite many stories and rhymes from their own memory. Following the age of their exploration, they would ask several questions and speak in sentences of two to five words. By this age, their emotional vocabulary also widens. They like to make friends and to be around other children. They like to share their thoughts and feelings too. They have fears about things like monsters, villains, and darkness as their virtual fantasy world expands.

A four to five year old child will probably enjoy music, dancing and singing. As their physiological development is also ongoing, their safe use of scissors, pencils and crayons helps them in better exploration of their expressive side. They love to race and play around and enjoy climbing and jumping too.

Polishing their sorting skills, they are now able to organise their clothes and toys. By this stage, the child also begins to help around in the house with tasks such as setting the table, putting things away at their respective places, etc. They have good observation and pretending skills, so they are very interested in make-believe games. Their ideas of number and counting are also improved. With the initiation of schooling, the child’s language at this stage is becoming quite developed. They often enter into long conversations, usually involving fantastical ideas. At times they do get confused between fact and fiction. Their sense of humor is still in the developmental stage. They enjoy silliness in books and stories.

Pertaining to their moral development, the child at this stage knows the difference between good and bad. They look up to the approval from friends and family and enjoy being a part of the group also. They are able to play in cooperation with others. However, they might also sometimes lie or brag and even learn to steal. It’s a part of their development. They can lose control over their emotions easily and are prone to mood swings.

At this age the right and left handedness is established. They are able to run, hop, skip, jump and do several physical tasks with ease. Their hand eye coordination is still in the developmental stage and hence, they can be often seen spilling things.

They try to become physically independent in their daily routines. And may start creating invisible playmates. They are able to take directions more easily and love playing games in a group. In the language space they are able to recognize letters, write simple words and do simple arithmetic. They speak well, make few grammatical errors and are still learning the correct pronunciations. They love learning new words and their meanings. Their vocabulary is around 2000 words by now. Language development adds to enhancement of their self confidence and self respect.